President-Comandante Daniel and Compañera Rosario, Vice President of Nicaragua,
on the 86th Anniversary of the Birth of Comandante Carlos Fonseca Amador

June is a month full of the clouds bringing rains, bringing the season of rains, a season which, despite the difficulties it may cause, is essential for Life.

Carlos was born in these days of the month of June, Carlos, here accompanied by Tomás and Colonel Santos López; Santos López who is the vital link between the battle of our General Sandino and the continuity of the struggle that led to the birth of the Sandinista National Liberation Front. That is, the battle of Sandino taken up again by Carlos and the Sandinista Front.

Carlos was born back in 1936, in Matagalpa. And in this month of June, from June 23rd 1963, between June and October the guerrillas began in Río Coco and Bocay. That was the first guerrilla action of the Sandinista National Liberation Front.

In 1963 the Sandinista Front was born out of these battles. And Colonel Santos López was there at the front, there was Tomás and Modesto Duarte, who managed to occupy some communities in the Río Coco area, in Walaquistan, in Raiti.

Well, it was a guerrilla group that was just being born, but then came the offensive of the army imposed by the Yankees in Nicaragua, and in those combats fell the Sandinista brothers, founders of the Sandinista Front, Francisco Buitrago, Jorge Navarro, Iván Sánchez, Boanerges Santamaría, Modesto Duarte and Faustino Ruiz “El Cuje” fell. Their blood was spilled there, for Life, for the Life of the Nicaraguan People! 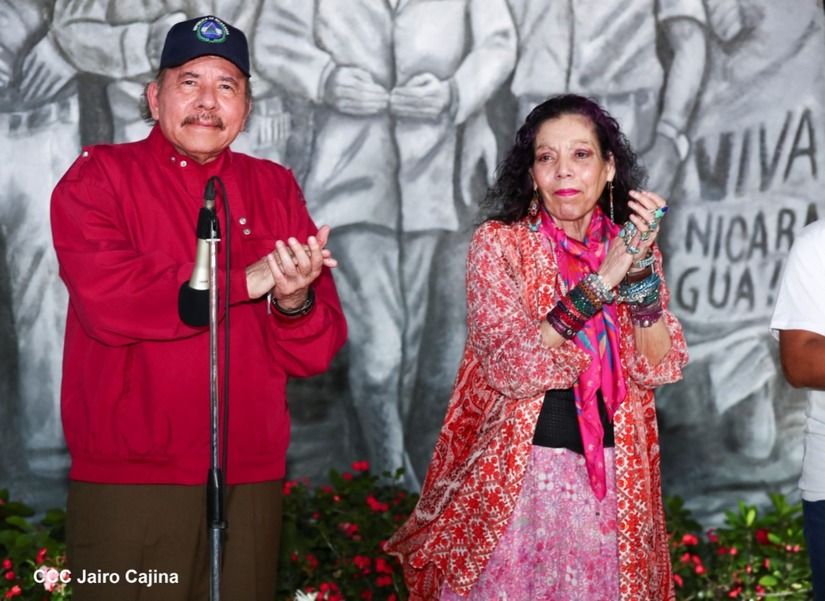 We expected the Revolution would triumph, but many Compañer@s did not expect to live to see it, and for those of us who lived through those days, later, thanks to our inexperience, we simply did not expect to see the perversion and evil of imperialist greed raging again in our lands. These were times of great learning...! And for us now these days are also days to honor the Sacred Blood that has been paid out of our blood, our hearts and our convictions, our willingness to continue striving, for as long as God gives us life, health and strength to do so.

And in this month of June, in 1979, fighting took place all over Nicaragua, and there was aerial bombardment here in Managua, and Comandante Francisco Rivera “El Zorro” was at the head of the guerrilla columns in Esteli. And there was fighting on the Southern Front. There was fighting in León, in Chinandega, around the Mining Towns, and throughout Nicaragua. It was the force of Sandino, it was Carlos's Force, the force of Colonel Santos López, multiplied throughout Nicaragua.

The truth is that these days, these dates mark innumerable feats of our People and of all the Latin American and Caribbean Peoples. We have only to remember that we are on the eve of that heroic battle, a gigantic battle, which meant the end of Spain's dominance in our America: the Battle of Carabobo, with General Simón Bolívar at its head.

And in these days of June, on June 24, that is, tomorrow, we are on the eve, look at what an important date, and it seems incredible that this miracle occurred at the time, because on that day, on that date, the Federation of United Provinces of Central America was created, uniting Central America! Guatemala, El Salvador, Honduras, Nicaragua, Costa Rica, one Nation, one People.

What today remains a challenge, remains a dream, for it is a challenge, to achieve as well as Latin American and Caribbean unity to also achieve the unity of the Central American Peoples. We are Brothers, we were born together in the fight against the Spanish invasion, in the resistance against the invaders, in the battles against Yankee expansionism. It was Central America with Nicaragua at the head that defeated the Filibusters here in Nicaragua.

But in fact there are innumerable battles that it would be long to list. And today, in this year when we are at the birth of a New World, indeed, a New World is being born, all births are painful and this is a birth for Humanity, burying Imperialism for Democracy to be born through Multilateralism. The world's Peoples growing, becoming stronger in the face of the death throes and spasms of Imperialism. We are witnesses, Sisters and Brothers, to that miracle, which is the miracle of the Resurrection.

Today is Father's Day, for who else but humanity's greatest Father, one that all of us have: Christ! Christ! Christ giving his Life for the People, for the poor, for the humble, and being insulted, slandered, by the false priests in the temples, who were the ones regarded as legitimate.

Since Christ had no temple, they denied his legitimacy, believing Christ was coming to supplant them from their temples so as to become the owner of the temples... No! Christ came to lift up the soul, the spirit of the impoverished, of peasants, of workers, of Humanity, for Peace and for Freedom. That is the Father, Our Father in Heaven... Our Father who art in heaven!

And great fathers too, Father Bolívar, Father Sandino, Father Zeledón, Father José Dolores Estrada, Father Andrés Castro, casting the stone in defense of the Sovereignty of our Nation, of our People. 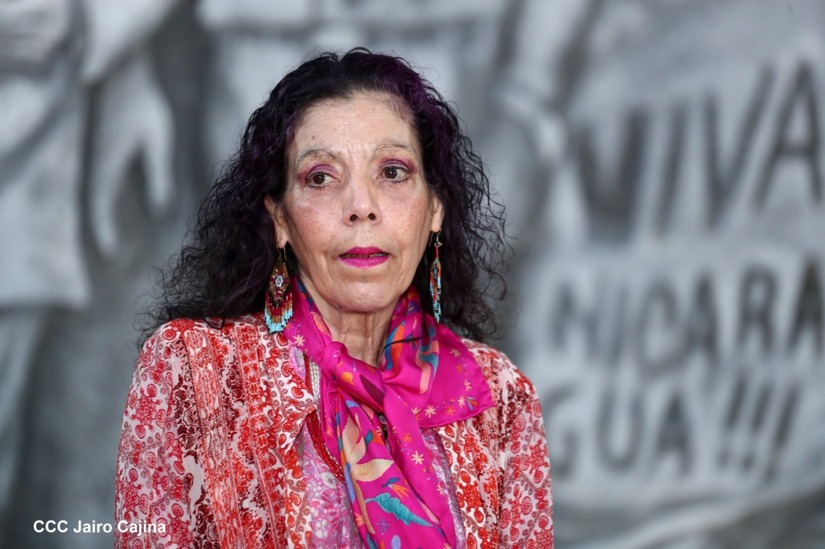 Remarks by Compañera Rosario, Vice-President of Nicaragua,
after the Commemoration of the 86th Anniversary
of the Birth of Comandante Carlos Fonseca Amador

How beautiful all these days are, how intense these days, how replete these days... Full of heart, full of emotion, full of revolution, of song and flowers, of breeze and light. Full of a Nicaragua Blessed, with Dignity, Sovereign and for ever Free!

Our Nicaragua, where Peace shines beautifully, where our Flags are not stained with the blood of Brothers and Sisters. our blue and white flag that some tried to besmirch, our red and black flag, always catching the wind, always to the fore, always further on, defending the blue, white and blue, in defense of Freedom, Dignity, Brother and Sisterhood, in this Nicaragua of us all.

When one has looks more closely, when one goes through these Sacred Dates, it is like reliving those moments that forged us. Moments of fulfillment, but also moments of forging, of learning. Because after all, nothing prepares us for Triumphs, except, in the sense that we know as Human Beings that we are willing to give our lives, for the Nation, for its Well-being, out of Brother and Sisterhood, but at the same time we know that that this offering of our lives must lead us to Better Times.

Times to learn... All times are for learning, but during those days, all the Sacred Blood that was given, that was spilled, that the perverse, criminal, genocidal, nefarious Dictatorship shed, everywhere. How can we not venerate that Sacred Blood today, how can we not give thanks to each of these Brothers and Sister and their Families, how can we not feel that their sacrifice and their dedication must be compensated with ever more dedication and ever more willingness to serve our country's families, serve our Nation, and to continue making our way with heroism every day.

Because heroism has multiple forms... heroism in battle, heroism at work, heroism in the consciousness and practice of our Nation's Dignity, heroism reacting with love in the face of hatred. And overcoming that hatred, overcoming the Death they wanted to impose on us once more, not long ago, and which they did impose on us for a little while.

Because always in a Country, in a Nation like ours, and with a People like ours, it is impossible to forget where we come from, what we are, forget the History that makes us strong, and if such hateful attacks occur, how we must face them, and drive them off, extinguishing them with Love, Hope and Faith.

I feel very moved by these dates, because being present in these anniversary events I remember what it is to be alive. They say, "to remember is to be alive”, so long as the past does not paralyze us, neither the good times, nor the not so good times, because we have to keep moving onward. But one is strengthened when one remembers everything in the life of a Country like ours, of sacred beliefs, sacred practices, and limitless Courage, Vigor and Glory!

These days and every day is for telling our People how much we love each other, because Love manifests itself by striving, working and being part of this great Nicaraguan Family, for whom we are convinced and determined to maintain, defend and safeguard the greatest treasure of all which is Peace, and to make our way, step by step, striving against and overcoming Poverty.

These are complex and difficult times the World is living through, with so many conflicts provoked and created by Empires which are evil, which are satanic, which are perverse, which are diabolical. But more and more the world's Peoples are aware of Freedom and more aware of our duty to go and do Good. And doing Good means defending our rights, the right to live peacefully, safely, to work and study, and above all with the basic conditions for well-being, for prosperity.

So, here we are, today on the 23rd, honoring Carlos, the founder, the visionary, the one who knew how to see beyond his limitations. That is a metaphor and at the same time a symbol: Beyond physical limits. Because I remember that Carlos was said to have very limited physical vision... But what a vision! As a revolutionary, as a militant, as an evolutionary, special being, in many ways an unrepeatable being.

And when we think of Carlos and we pay tribute to Carlos, we say he is an example, as our General Sandino is an example. It's simply that this country is full of miraculous beings. And we must always recognize that prophetic vision of Sandino, who was able to glimpse his role in this plane of life, without believing himself to be special, but rather out of duty, the duty to defend his country's dignity, with nothing, just with his open hands, as a laborer, an artisan, a worker. He had nothing, but he did have heart and spirit, strength of Spirit, and that is what we Nicaraguans have.

Nicaragua will stay Free and is Free, because it has sons and daughters able to see with their Heart, with their Soul, with both their eyes and their consciousness; able to see what is the given task at each moment, to move onward, lighting the way ahead today and for the future and, above all, ensuring the continuity of our glorious history, a history of Sovereignty, a history of Dignity, a history of Triumphs. And we are going on to even more Victories!

Thank you, Compañer@s. A warm embrace to you all.