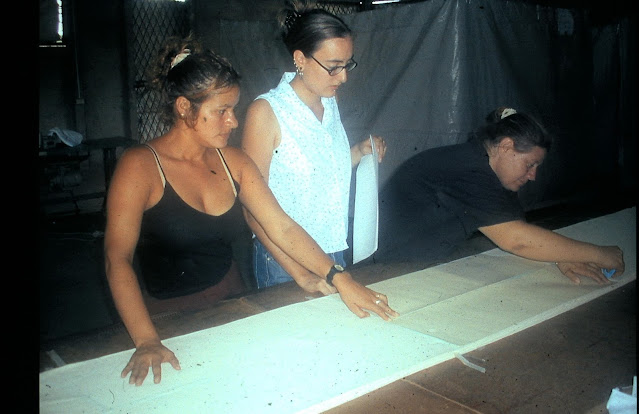 In 2001, my main task in Nicaragua was to be a "Karen": the obnoxious, entitled white woman who uses her privilege to get her way. Although I was only 25, I was able to lend my white face, my American accent and my pushy “get-me-your-manager” skills to women’s cooperatives to gain them access to and help them navigate the Nicaraguan bureaucratic system.

This was during the neoliberal years in Nicaragua, a time when the women we worked with – poor, working women – were simply dismissed by virtually any institution. Following on the popular Sandinista Revolution of the 1980s led by grassroots movements, the neoliberal governments from 1990 to 2006 were led by oligarchical elites who not only looked to the U.S. embassy for policy guidance, but culturally deferred to the U.S. as well. After a few trips accompanying members of the co-ops to government offices, I could not deny that internalized colonialism – with its adopted attitudes of cultural inferiority, racism and classism – was a real thing, and that it was hindering the co-ops’ progress.

In the early 2000s, our organization, the Jubilee House Community, was working with several worker-owned cooperatives formed to create sustainable jobs for Hurricane Mitch refugees. I was given the mission of working with a women’s sewing cooperative – which later became the world’s first worker-owned free trade zone – to help them with the administration of their co-op, imports of their raw materials and exports of their finished product: organic cotton clothing. The co-op members needed some guidance in running their business; but more urgently, they needed my face to open doors for them. If the very capable co-op members went by themselves to any given office – the Ministry of Labor, Ministry for Development Industry and Trade, the Free Trade Zone Corporation, the Exports Registry, Customs – they were given the run-around. When I went with them, however – showed my white face, spoke with my American accent, and proved that these women had a gringo organization backing them – then suddenly doors opened. They got the information they needed, the meetings they needed, the necessary connections in the world of business that eventually led to their co-op getting projects financed by multilateral institutions.

I admit that I am ashamed of the way I acted in those years. I was that obnoxious customer insisting that we get attended now. I was that jerk pushing our way to the front of the line. I was that detestable woman throwing my weight around and threatening to call superiors. I was doing it for a good cause, but I still went home from those encounters feeling dirty.

I’m pleased to say, however, that "Karens" won’t get very far in today’s Nicaragua. The current Sandinista government – whose slogan is “the People are President” – has managed to revolutionize civil servant culture, an achievement which perhaps wouldn’t be at the top of every government's To Do list, but has produced surprisingly significant results.

For example, since 2007 when the Sandinista government came into office, 23,345 micro and small businesses have been formalized, meaning those workers are now part of the social security system, receiving benefits and paying into their retirement pensions. This is essential in a country where small businesses account for 70% of employment and are the backbone of the nation’s economy. Additionally, since the neoliberal years when worker-owned cooperatives struggled just to survive, in the past 14 years 318,000 members have been inducted into 5,900 new cooperatives, 300 of which are women’s cooperatives.

These achievements can be credited to the government intentionally simplifying and streamlining its necessary bureaucratic processes, massive outreach campaigns, and a cultural shift within the bureaucracy itself. What do these changes look like if you go into government offices today?

The good news? The co-ops no longer need a "Karen" to get the job done; they actually get along better without me! The bad news? Now I have to wait in line just like everyone else…but I do it with a smile.