Sergio Ramirez on Nicaragua - treason all over again... 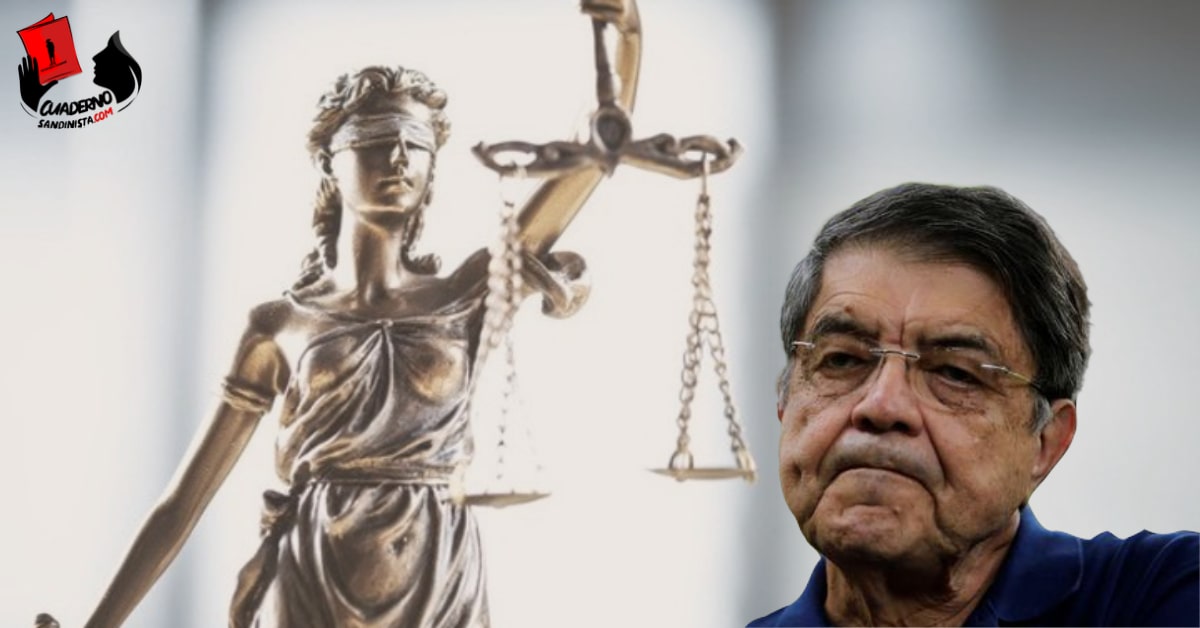 As Nicaragua's presidential and legislative  elections next November 7th draw nearer, so the attacks demonizing the country's Sandinista FSLN government led by President Daniel Ortega become progressively more intense. Lately, Western propaganda outlets have focused on the recent arrests  of various figures from Nicaragua's political opposition, claiming that they are abitrary detentions aimed at preventing any challenge to Daniel Ortega's presidential candidacy. A recent Guardian interview with highly regarded novelist,  Sergio Ramirez, a long standing, fierce critic of President Ortega and Vice President Rosario Murillo, his former comrades, offers a litany of the falsehoods and distortions currently being deployed to discredit their government.

Ramirez was Daniel Ortega's Vice-President from 1985 to 1990. In 1994, after failing to oust Daniel Ortega from the FSLN leadership he and other ex-Sandinistas formed a social democrat party called the Sandinista Renewal Movement (MRS). After a desperately poor electoral showing in 1996, Ramirez ostensibly retired from politics. But he remained a very high profile, virulent political critic of President Ortega and has been extremely active and influential mobilizing international opinion in Latin America, North America and Europe against Nicaragua's Sandinista government. In effect, Ramirez leverages his international influence to compensate for the comprehensive lack of support inside Nicaragua for the political opposition he represents.

Inside Nicaragua, recent well respected opinion polls have consistently indicated well over 60% electoral support for President Ortega and a little over 20% support for Nicaragua's opposition parties. Like so much else contradicting the continuing attacks on Nicaragua's Sandinista government, that fact is systematically omitted from practically all current reporting on the country. In fact, the positive revolutionary changes President Ortega's administration has brought about in Nicaragua completely contradict the image of the country depicted by Sergio Ramirez and the rest of Nicaragua's political opposition.

Their attacks all start from the standard propaganda premise that President Ortega is a corrupt, brutal dictator. However, his administration's wide ranging achievements on behalf of Nicaragua's people are recognized by numerous relevant international bodies from institutions like the World Bank and the Central American Bank for Economic Integration to the UN Food and Agriculture Organization and the World Health Organization. Under President Ortega, Nicaragua has implemented the most advanced devolved government for indigenous and afrodescendant peoples in the hemisphere and is the leading country in the Americas in terms of women's representation in public life. Nicaragua has the most extensive and best equipped public health system in Central America.

The country is practically self sufficient in food production thanks to a radical democratization of its agricultural, livestock and fisheries production. It has the best highway system in Central America. Nicaragua's innovative education system, especially its outreach programs to rural areas and its use of audio-visual media is very highly regarded in Latin America. International financial institutions regard the country as among the most efficient users of their loans for development  programs. Nicaragua's diversification towards renewable energy is among the most advanced in the region. Likewise, the country is the safest, most secure in Central America.

Even so, these tremendous achievements rarely if ever figure in the narrative deployed by Western corporate and alternative media because they contradict the big lie that Daniel Ortega is a corrupt brutal dictator. The Guardian interview with Sergio Ramirez promotes that big lie shamelessly with complete disregard for the truth. Omitting the Sandinista government's unquestionable achievements, the interview frames the country's reality within a distorted misrepresentation of the crisis in 2018 during which Sergio Ramirez's political allies combined with big business and the Catholic Church to attempt a violent overthrow of Nicaragua's government.

They failed, but thanks to the systematic false witness of the Western human rights industry, the extreme violence of Nicaragua's political opposition in that regime change crisis has been buried. Honest reporting challenging that false witness is available here and here and here, among many other sources never cited by propaganda outlets like the Guardian. As for the interview with Ramirez, among the bland puffery for his latest novel, he and his interviewer also purvey the current set of opposition falsehoods namely:

The fundamental background explaining this set of propaganda falsehoods is that the US government has declared Nicaragua to be a serious threat to the national security of the United States. The US authorities have implemented a series of measures attacking Nicaragua's economy. Last year, USAID produced a document called Responsive Assistance in Nicaragua which explicitly discusses ways of bringing about regime change in Nicaragua using local non profits. In response the Nicaraguan authorities have acted based on the country's criminal code along with other national legislation, as well as its obligations under international treaties, to investigate the opposition's criminal collusion in US aggression against the country's people and government. Opposition propaganda to the contrary, all the people arrested are being held for offenses detailed in the country 's criminal code. No one in Nicaragua is imprisoned merely for their political beliefs.

The office of the Public Prosecutor in Nicaragua is an institution independent of the government which in this case has found that many figures among the country's extra-parliamentary political opposition have not only colluded with, invited and encouraged US and European Union aggression against Nicaragua and its citizens but also accepted tens of millions of dollars from the US government. Over many years, they received that money formally via their non profit organizations but abused their non profit status, using the money corruptly so as to fund activities of the country's political opposition aimed at facilitating US government instigated destabilization. The Public Prosecutor found that Sergio Ramirez's non profit foundation was among the recipients of that money, so a court order was sought and obtained for his arrest.

No presidential candidates figure among the people under arrest. None of the people alluded to, for example Cristiana Chamorro, Felix Maradiaga, Medardo Mairena, Arturo Cruz, Juan Sebastian Chamorro, are even members of a political party in Nicaragua. Only Sergio Ramirez can explain why he describes people who are not even members of a political party as bona fide presidential candidates. As things stand, six opposition political parties (PLC, PLI, APRE, Camino Cristiano, ALN and Yatama) will participate in November's elections along with the ruling FSLN party. So it is equally absurd to suggest that the electorate has no choice for whom to vote. On July 24th and 25th last, over 60% of Nicaragua's electorate turned out to verify their voter details in their respective voting centers prior to the actual vote in November. Clearly Nicaragua's voters disagree with Sergio Ramirez that the elections are a farce.

Ramirez and his Guardian editors continue to retail the lie that the 2018 protests were peaceful. In fact, 400 police officers suffered gunshot wounds and 22 were killed by the opposition peaceful protestors who also burnt down schools, attacked health centers and radio stations and took numerous hostages at the roadblocks they set up under the control of armed thugs. Some of that violence is documented here and here. The Guardian reports "400 young people" being killed when in fact just 10 or 12 students died, half of them Sandinista supporters killed by opposition activists. The true overall figure of people who died during the crisis is around 260, with over 60 being Sandinista supporters and the great majority passers by caught up in the opposition-provoked violence.

Among the most odious of the false claims made by Ramirez and the Guardian is the smearing of Vice President Rosario Murillo, which points to the deep rooted misogyny of both Ramirez and the Guardian's editors. Ramirez cannot accept that a supremely talented woman wiped the floor with him and his opposition accomplices politically, consigning him and his MRS movement to electoral irrelevance. Neither he nor his colleagues of the now defunct MRS  will ever forgive Rosario Murillo for that. Murillo was a key strategist in rebuilding the FSLN as a political party through the 1990s and up until the party's successful 2006 election campaign.

From 2007 to date, Daniel Ortega and Rosario Murillo have put together and managed the ministerial and legislative team that designed and carried out policies which, up until the US instigated crisis of 2018, gave Nicaragua the most successful development policies in Central America and among the most successful in all of Latin America and the Caribbean. Rosario Murillo is a revolutionary anti-imperialist readily comparable in the regional context to other outstanding women political figures in the region, from Delcy Rodriguez to Cristina Fernandez or Dilma Roussef. Ramirez and the Guardian cannot deny Murillo's tremendous achievements and talent, so they rubbish her and smear her as a deranged kind of "mad woman in the attic", revealing their own patriarchal instincts.

The interview with Ramirez has the headline ""A feeling of dejá vu" which could hardly be more appropriate. Yet again, a member of Nicaragua's right wing elite has allied with the country's historical aggressor, the United States, colluding in US aggression to attack not just his own country's legitimate government but also ordinary Nicaraguan citizens. In this case, the treason of Sergio Ramirez comes dressed up as brave and principled defiance by a minor high culture icon. However people in the US might well compare such treason with that of Ezra Pound, a much more influential cultural figure than Ramirez, who broadcast from Italy against the Allies during World War Two. The US authorities threw him in a cage and he only escaped a death sentence by pleading insanity.

Despite effectively collaborating with US government aggression against his country, Ramirez attracts sympathy among susceptible US liberals and European social democrats by feigning to be progressive while in practice supporting Nicaragua's traditional oligarchy, big business and the local Catholic Church hierarchy. In Nicaragua, people draw the contrast between Ramirez's base treachery and the illustrious example of Rubén Darío, also an incomparably more influential figure culturally than Ramirez. Darío served his country faithfully as a diplomat and was resolutely clear eyed about the menace of US imperialism in his day. As well as betraying his country, Ramirez has betrayed the cultural, spiritual and political legacy of Nicaragua's national heroes Rubén Darío and Augusto C. Sandino. In any case, for most people in Nicaragua, the opinion of politically marginal figures like Ramirez is a matter of complete indifference.