Let's not fall into the empire's trap 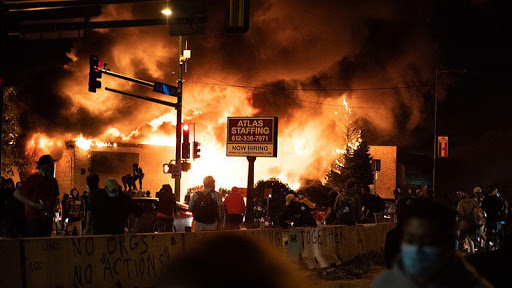 I'm sorry, those who know me know that I'm srongly antiracist and have previously written (positively) about the American Black Lives Matter (BLM) movement, but things that have happened in the last two years have dramatically changed the perspective.

It is obvious that the United States is a racist country, but what is happening today is unfortunately not a genuinely popular revolt but rather a manipulation of events to resolve the current power conflict within the American elite. I am sure that neither Malcolm X nor Martin Luther King would have supported this kind of protest, not because they would accept at all the discrimination and violence against blacks and minorities in the United States, but because the protests are developing in a sectarian sense to divide improverished peopulation of the United States and provoke a civil war. This is not what those two great leaders wanted.

What do I care as an anti-racist that they throw away a statue of Columbus (who incidentally was not the worst of the conquerors)? When in fact these groups, if their commitment was really serious, should be fighting the currently prevailing system of racism and colonialism through which the U.S. oppresses the rest of the world?

If they are anti-racists and anti-colonialists, they should demand an end to the funding of the Zionist State of Israel, or an end to the colonization of Puerto Rico, or of the blockades of Cuba and Venezuela, or the lifting of the evil Nica Act, or, for example, the dismantling of the colonial structure of the Organization of American States, a living example of U.S. colonialism and Atlanticism in our day, which routinely does such infamous things as the shameful coup d'état against the democratically elected indigenous government of Evo Morales Ayma in Bolivia.

Don't think that we in Africa, Asia and Latin America have forgotten the 500 or 600 years of European colonialism. But that same colonialism is now killing us today, not centuries ago. It is today that we must stop the genocide. You can not be antiracist without demanding the end of a world economic order that feeds on human flesh and is the basis of the economies of the United States, Canada and Western Europe.

If one is serious about the problem of racism, one must necessarily be anti-imperialist. One cannot be anti-racist and accept living in the shadow of imperialism, simply because it is only within that oppressive and inhuman structure that racism makes sense. Everything else is just excuses, empty talk trying to mask the true nature of power relations in the world. Any seriously anti-racist movement must necessarily be politically independent from imperial interests, and if it is a well-informed movement it must also, of necessity, avoid at all costs falling into the trap of sectarianism.

In contrast, Black Lives Matter receives (and willingly accepts) the full support of the Democratic Party, whose leader Hillary Clinton should be held accountable for the crimes against humanity committed by the United States against, among many others, the people of Libya, where they used the racist card to destroy the only society with a true welfare state in North Africa, the only country that made a serious proposal for the economic independence of the African continent by creating their own regional currency and by using its enormous oil and gas resources for the benefit of the African and Palestinian peoples.

If they were anti-racists, they should be holding Joe Biden accountable, since he as well as his son were involved in the U.S. coup in Ukraine, which incidentally was carried out with fascist groups trained by... the U.S. Do you remember last February 5, when Nancy Pelosi, head of the Democratic caucus, tore up Donald Trump's State of the Union address? Well, there was a part of that speech by Donald Trump in which Nancy Pelosi applauded the whole time: It was when Trump presented the anti-Venezuelan imperial puppet Juan Guaidó in the Senate, and when he dedicated himself to attacking countries like Cuba and Nicaragua by vindicating the racist and colonialist ideology of the Monroe Doctrine.

It is impossible behind all this not to see the support that BLM demonstrations receive from the Soros Open Society Foundation, the Ford Foundation, Silicon Valley, Hollywood, CNN, etc. Since when has the avowed zionist Mark Zuckerberg been anti-racist and anti-colonialist? All of them are the US power elite, Wall Street, the military-industrial complex (General Collin Powell, the same one who lied about the Iraq war, spoke last week at the Democratic Convention), media power (from Hollywood to Netflix), Big Pharma that wants to put everyone in quarantine... these are the sectors that today, all of a sudden, have become "anti-colonialists". Isn't that at all suspicious?

This is not merely a tactical alliance within a process of struggle. BLM has in practice become a political device in the Democrats' electoral strategy.

The slogan of "anyone but Trump" is a stupid one. Donald Trump, for all his millions, and his support for the National Rifle Association, and with all his reactionary values, is in fact not in command in the United States. Indeed, Trump is a thorn in the side of the American (and Western, and racist) power elite who, before being patriotic, are imperialist and globalist. That's why for them a nationalist like Donald Trump, no matter how reactionary, is the wrong guy to lead the empire politically, and that's why they want him out of power. And that's why they inflame the street with Black Lives Matter, helping to create an increasingly paranoid, divisive environment in the U.S., where there is less and less talk of social and economic rights for all and almost only talk of blacks versus whites or of wearing a mask or not.

What the U.S. power elite wants to do is kick over the table of the current world order (which no longer suits them) and replace it with the direct rule of multinational corporations and the mass surveillance of all humanity. They know very well that they cannot rescue the dollar, and that is why they want to destroy the world economy in order to remain masters and lords of the resulting ruins. That is the real plan.

Neither Malcolm X nor Martin Luther King would be supporting this. Malcolm X proposed that black communities should arm themselves to defend themselves and become independent by building their own black power. He would have laughed at anyone who proposed some kind of insurrection to take away the power of the white man. He wasn't interested in that, he was interested in the power of black people. And Martin Luther King, on the other hand, would not have supported this either because of two things: Firstly, because he was a pacifist, and secondly (and I think more importantly) because he wanted a great broad popular coalition of black and white people to build a more just society.

But it's not a popular coalition that they're building in America, but the plague of the division between "blacks" and "Nazis," between the "good guys" who want to throw Trump out and the "evil and ignorant", the “deplorables” as Hillary Clinton called them, who support him. It may come as a surprise to some, and for that reason it's worth stressing, because CNN does not show it: Black and Latino people also go to the demonstrations in support of President Trump, not necessarily because they are "Nazis" or "racists" or "illiterate", but because they need to go out and work to earn their living, just like our people here in Nicaragua, while a series of fanatical politicians in the States of the Union want to keep them locked up with the quarantine.

These fanatical Democrat politicians want to lead the United States into a civil war, one tailored to imperialist interests. And they are trying to drag the rest of the world into it as well. Who can be so naive as to believe that the Democratic elites, with the support of the Republican old guard, won't go to war with China tomorrow? It is not "crazy Trump" threatening humanity, it is the empire preparing the destruction of the world. Let's not fall into the trap they are setting for us.