On Cuba, Nicaragua and Venezuela. The standard Western canonical sources of record, namely international institutions, non-governmental organizations and media outlets, practically universally contend that all three countries are authoritarian or even tyrannical regimes, denying their peoples' basic democratic rights. The current COVID-19 pandemic has demonstrated that the reverse is true.

Cuba has led the world as an example of human and scientific solidarity, while Venezuela and Nicaragua have clearly protected their people's well being better than their neighbors. But the same North American and European governments falsely accusing Venezuela and Nicaragua of tyrannical  repression, have themselves addressed a complex public health problem by mobilizing police forces to enforce aggressive, ill-conceived restrictive measures against populations deliberately cowed by fear.

For their part, Cuba and Venezuela have overcome the COVID-19 crisis despite cruel, illegal, unilateral extortion measures seeking purposefully to diminish popular support for their governments. So far, Nicaragua has faced somewhat less aggressive financial coercive measures, but they have still seriously affected the country's ability to access resources to address the effects of the COVID-19 pandemic. These criminal coercive measures denying the basic rights of people in Cuba, Nicaragua and Venezuela have proven of little interest to the Organization of American States, or to unjustifiably prestigious human rights NGOs like Amnesty International or the International Federation for Human Rights and of no interest at all to chronically mendacious Western news media. Since these sources also form the basis for much academic research, their false witness in turn contaminates the historical, economic and social science record.

In the case of Nicaragua, reporting in North America and Europe on the country's policy against COVID-19 follows identical patterns to false Western reporting of the violent failed coup attempt of 2018. Back in 2018, the media and NGO disinformation offensive in support of the violent failed coup attempt from April 18th to July 17th insistently repeated two main lies. The first lie was that the sandinista government used lethal force to repress spontaneous peaceful protests supported by a majority of Nicaragua's people. The second lie began even before the coup attempt was defeated in mid-July, namely, that  in Nicaragua opposition activists suffered unjust persecution for crimes of which they were falsely accused.

No impartial review of the available sources supports these two falsehoods. Opposition representatives and the international media spreading their lies, deliberately avoid addressing many unanswered questions about numerous lethal opposition crimes of violence. The enduring false witness of Amnesty International's reports on Nicaragua reflects the typical human rights à la carte culture of all the main international human rights institutions especially the consistent doubletalk on Nicaragua in relation to concerns about freedom of expression. This inherent breakdown in conventional reporting standards inevitably also results in examples of academics compounding those institutional, NGO and media falsehoods, leading to a systematic contamination and corruption of the historical record.

Similarly, during the COVID-19 pandemic, Nicaragua's US controlled opposition has also insistently emphasized two main lies. Firstly, that the sandinista government has been negligent and incompetent, doing nothing to prepare for the pandemic. Secondly, that it has systematically hidden a disporportionately high number of people dying from the virus, while silencing responsible critics recommending quarantine measures. In fact, Nicaragua has been very successful in the careful balance it has struck protecting its population fom the virus while facilitating relatively normal social and economic life. This contrasts sharply with the way its northern neighbors, particularly El Salvador and Honduras have tended to use COVID-19 as pretext for repression. 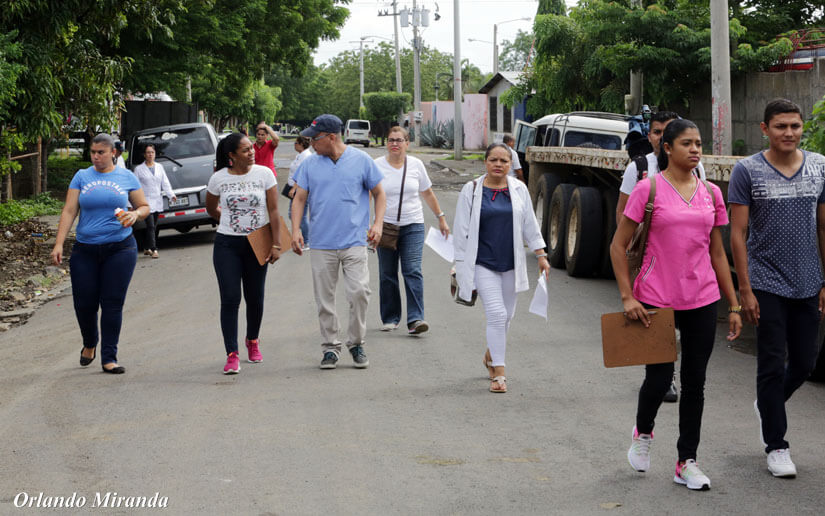 In regional terms, Nicaragua's preventive community approach to health care has emerged as model for how an impoverished country can control the virus while ensuring that social and economic life continue. However, Nicaragua's US funded opposition suppress that regional context, focusing on false accusations which their propaganda outlets often illustrate with audiovisual material or photographs from other countries, just as they did in 2018, for example using photographs from Ecuador of bodies awaiting burial. In effect, the current opposition psychological warfare offensive is simply another stage of the US government inspired endless push for regime change.

Opposition aligned doctors are promoting a false campaign on COVID-19 in Nicaragua, setting up spurious medical associations and a propaganda  "observatory" spreading false information and statistics. They claim falsely that the government's Ministry of Health is rigging data when in fact it is impossible in a small country of just 6.5 million people to hide cases of COVID-19. Like its revolutionary allies in Cuba and Venezuela, Nicaragua's government is battling both COVID-19 and disinformation aimed at destabilizing and damaging the economy, exactly the same opposition objectives as in 2018, resulting from their chronic inability to win democratic elections.

In both the failed coup attempt in 2018 and in the current psychological warfare campaign, the fundamental tactic has been to deploy cynical reporting dressed up as concern for human rights. Opposition politicians in Nicaragua hysterically calling for quarantine measures have deployed the same "guided by science" demagoguery as their counterparts elsewhere. In fact, as even Richard Horton of the "Lancet" journal of medical science has conceded, "Scientists too often sculpt data to fit their preferred theory of the world..." further noting, "Journal editors deserve their fair share of criticism too. We aid and abet the worst behaviours". His own editorial practice as regards Nicaragua confirms that frank admission, despite a belated effort to give both sides of the current story.

From Ukraine, Syria and Iran to Cuba, Nicaragua and Venezuela, examples abound of Western institutions, NGOs and news media bearing false witness. Bodies such as those of the United Nations, the European Union and the Organization of American States have cynically misreported events, falsely seeking to justify efforts at illegitimate, coercive regime change by the United States and its European allies. Over time, the persistent false witness embodied in phony, faithless reporting crystallizes into false memory, becoming for all practical purposes the canonical historical record for the great majority of people living in North America and Europe.

It often seems that no amount of rational argument can roll back a dominant irrational narrative deployed via wholesale false coverage from mainstream news media, reinforced by mass deception campaigns on social media. However, Nicaragua demonstrated in 2018 that a large number of people can certainly be fooled and bewildered for a short while, but only for a matter of weeks. President Daniel Ortega and his sandinista government team trusted Nicaragua's majority to understand their own material and national interests in 2018, just as they know they can do now, as they work to overcome COVID-19. Whatever Western history books may end up saying, Nicaragua's people have repeatedly elected their authorities based on their lived experience of the country's broken, perverse, US-owned opposition and the formidable strength of  the sandinista model of national development.