The great hypocrisy of our time 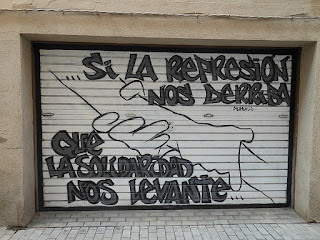 When it is truly the people who rise up, you can tell from a mile away. When the protests are not organized by the powerful, the demonstrators do not look like soldiers or criminals. They have no mortars or home-made weapons, no contact bombs, much less pistols, shotguns and military rifles as the coup activists here in Nicaragua did.

Curiously, in the case of genuine popular uprisings, the most violent thing you see are stones, at most some Molotov cocktails, and generally those who get killed or wounded are the demonstrators, not the police.

In the protests in Chile, Honduras or Catalonia, not a single policeman was killed... In those protests the demonstrators did not torture people, nor did they strip them, paint them, tie them to poles or kidnap them, much less set other people on fire as happened here in Nicaragua. Here, during last year's failed coup attempt, 22 policemen died and 401, one in five of all the people wounded, were policemen.

After the protests of the last few weeks in several countries, where is Michelle Bachelet? Where is the IACHR? Where is the European Union? They are all on the side of those countries’ governments, condemning the "violence" of the demonstrators.

Here in Nicaragua, the coup-supporting daily newspaper La Prensa sells itself by  trying to portray eh police as  a  repressive army of the National Police, but its attempts to compare it with any other police force in the world are pathetic, especially those of the countries that say they are more "democratic" for having neoliberal governments who deploy armored vehicles, water trucks, tear gas in industrial quantities, rubber bullets, clubs of all sizes and shapes, even staffs made of titanium that can cause serious bone fractures. As if all that is not enough in those countries, the Army is then sent onto the streets with military weapons. No international body defends the protesters when all that is done by a neoliberal government,.

The silence of Madam Michelle Bachelet, with her late-in-the-day  condemnations of "inflammatory rhetoric" and "a call to all parties to dialogue" (but how, if the protests are not led by a political organization or any visible leadership?) are little more than pure hypocrisy. Because the protests in Chile are against neoliberalism and the country’s  repressive political system tailor-made for the dictator Augusto Pinochet, a system which she, when she was president, didn't know how to change, if in fact she ever wanted to change it.

Michelle Bachelet says she is "concerned" about the army's violence against the protesters, but does not condemn it. When ten dead were already in Chile, the president, Sebastián Piñera, assured the population that the country was at war against a "powerful enemy". Madam Bachelet, what rhetoric could be more inflammatory than that?

Sebastián Piñera, by the way,  is one of Chile's richest financiers. His brother José was one of the "Chicago Boys" who implemented Pinochet's neoliberal reforms in the country, among other things by designing the private pension system against which people are now rebelling. In the end, what is true about the current protests in Chile, is equally so for the protests in recent weeks in Ecuador, Honduras, Haiti, Colombia, Catalonia, France, Lebanon, Iraq and even South Korea: A corrupt system dominated by financial capital preying on human beings and the environment.

Europeans and Americans are very worried about not eating beef so as not to contribute to global warming, and they are right, since cattle farts produce the greatest amount of methane, one of the worst greenhouse gases. However, deep down they should understand that the most serious problem, which causes all the other problems, is a system that depends on devouring people in order to reproduce itself. There should be a protest movement against devouring people!

Rich countries, which concentrate 90% of the world's wealth in just 10% of the global population, had an per capita average of more than 10 metric tons of carbon dioxide emissions for 2014. In North America, per capita emissions were 16.4 metric tons. Low-income countries, on the other hand, averaged just 3.5 tons. Nicaragua, under the Sandinista governments, managed to enter the group of middle-income countries in 2016, with about 2,000 dollars of GDP per capita. However, thanks to Sandinista policies, it has very low emissions, just 0.8 tons of CO2 per person, according to the World Bank.

This low level of carbon emissions in Nicaragua, despite more economic development and higher per capita income, are linked, for example, to the change in the country's energy matrix from just 20% clean energy generation in 2006 to 56.37% today. The expectation is to reach 70% clean energy generation soon, thanks to several renewable energy projects newly underway. This is despite the fact that the country's electricity coverage will reach 97% by the end of this year, up from 50% in 2006 .

Countries like Nicaragua promotings these kinds of policies of real democratization are catalogued as "dictatorships" by Western dominated international human right organizations. Against these countries the West promotes destabilization policies of all kinds, including "color revolutions" financed by NGOs nurtured specifically for that purpose. When these countries seek to defend themselves against such attacks, they are portrayed as "repressive tyrannies”.

Their governments are condemned for allegedly violating human rights, and the mercenaries who do the imperialist dirty work on the ground are described as "democracy activists”. But when pro-imperialist governments protecting the dictatorship of global finance repress legitimate uprisings by their peoples, they are described as “defending democracy”. That is the great hypocrisy of our time